At this age, children are full of thoughts. They learn lots more words, talk a lot, and invent their own stories. They often speak much more clearly and it becomes easier to understand them. The child still does a lot of magical thinking, especially if they find themselves in new situations or get too much information at once. They believe that fairy tales really exist. Three-year-olds begin talking in a new way and can start understanding rules. They can also understand simple connections and start solving problems using logical thinking. They’re still in a period where they want to test their own will and test the limits, but the closer they get to the age of 4, the more stable and consistent their mood becomes. They start becoming interested in numbers, and it’s important to them that everyone gets the same amount.

Children often enjoy playing with other children. They practise agreeing on what the game should be about and the different roles in it. Role plays are common as children explore their emotions and characteristics. They often want to play dress-up as doctors, looking after children, or going and doing the shopping. But they can also play alone and independently of others.

The child moves a lot, running and jumping about. It’s common for playtime to be a wild affair. They want to roam across increasingly large areas. Although many children like kicking a ball around, catching it in their hands is still a challenge. They increasingly try to dress and undress themselves. Many children ride a tricycle or start trying a balance bike.

The child develops their fine motor skills and starts drawing circles and squares, and many even draw stick figures. Many children can also hold a pen better and eat better by themselves using a spoon. They can complete puzzles of around six pieces and can count two or three objects. Beads are fun to play with or can be used to make a bead necklace. It’s also fun to help out at home, baking or sorting the laundry. 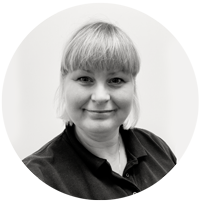